This week, Tina challenge use to pick a place. To be honest, it was not an easy task, since I found that every place is special and has its own character. When I tried to recall back the memories about the places I had visited in the past, Bratislava popped into my mind. Bratislava, the capital of Slovakia, where I visited couple of years ago, with my friend, T.

After spending three nights in Budapest, T and I continued our journey to Prague. But, before issuing the train ticket, we realized that we were going to pass Bratislava on our way to Prague. Then, the idea to stop over in Bratislava came into our mind. Instead of issuing ticket to Prague, we changed our destination to Bratislava.

We left Budapest at 10 am after having our last breakfast in Budapest. We hopped on the train, and got one compartment for ourselves. In the middle of our journey, a Slovak girl joined us. She was on her way to London. She was a bit surprised when she found out that we were heading to Bratislava instead of Prague.

“I am so happy to hear you’re going to Bratislava. Normally, people just ignore it and go straight to Prague,” she said.

The journey took two hours. There were no particular things attracted my eyes, and I did not take so many pictures along the way. Instead, T and I spent our time by chatting with that Slovak girl. At 12.00 pm, we arrived at Bratislava train station. After saying goodbye to our companion, we hopped off the train and entered the station. If the train station in Budapest looked so old, the one in Bratislava looked much older. There were not so many people waiting there.

We left the station and walked towards the tram station located opposite to train station. Our purpose was going to the old town or in Slovak known as Staré Mesto where our last minute booked hotel was located. Unfortunately, T’s mobile phone could not operate all of a sudden. So we could not check the bus number or tram to get there. We tried to ask an old man, but again, unfortunately he answered with sorry look, “Sorry. No English.”

We tried our luck to ask another person. Nonetheless, we were not so lucky. We found that the old generations were not really familiar with English. We were almost frustrated when a young man came to us and asked if we need some help, of course in English. This young guy was so generous. He told us the type of tram that passed the old town, with some sketch that he draw for us. God bless him.

Finally, we arrived at the Old Town. From here, we followed the instruction that I downloaded from the booking site. It was not easy to reach. In five minutes, we arrived in front of the receptionist. The young reception was waiting for us. After finishing all transaction, he showed us our room which was located at the attic. However, there were many lights coming inside from some windows. We were happy with our room.

The Old Town of Bratislava, Slovakia. 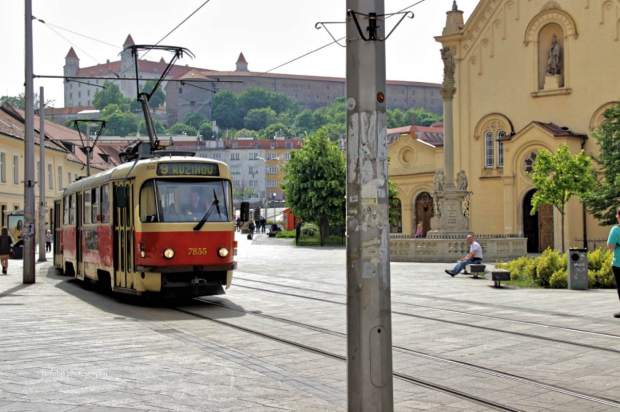 Since we just spent one night only in Bratislava, we did not want to loose many time. After putting our luggage, we left the hotel to explore the town. We stopped at one restaurant to get out lunch. I got a big beef burger and T got goulash, a special cuisine from Central Europe.Bratislava was not on our list. But, we were happy that we made decision to pick Bratislava to stopover. Let me tell you why.

Even though it  was just became a capital of Slovakia after the end of Communist rule in Czechoslovakia in 1989 during Velvet Revolution, the city had written history for centuries. Influenced by people from different nations and religions, Bratislava once was a coronation site of the Kingdom of Hungary from 1536 to 1978. The city has been home to many Slovak, Hungarian, and German historical figures. It was always nice feeling to be in a place where once important histories took place.

The old town was lovely. It is charming with many interesting places around. We knew that it was impossible to see everything in one day. Therefore, we did not set specific destination. We just walked following our heart. The weather was nice too. It was the first day I felt warm since I arrived in Europe. With population around 400 thousands people, Bratislava is a smaller capitals in Europe. It was not crowded and we were not worried about getting squeezed in pedestrian or street. Please wear the comfort walking shoes to walk on the cobble stone. When we walked, we found cities direction sign on the street. We were so excited when we saw our capital ‘Jakarta’ was written there. Many places were only within short walking distance. We did not even use the tram or train to explore. At the right and left sides of streets, there were many cute shops around, that made walking and window shopping were more enjoyable.  At one street, we found a shop wit the tittle ‘Ethno Sumba’. Sumba is one of the island in Indonesia. Another surprise for us. Indonesia is quite well known here. Even though the old town is easy to navigate, we got lost several times when walking in the narrow alleys, but the locals helped us to find our way. When we got rest at the yard of St. Martin’s Cathedral, we found some boxes of meals, with “Free meals to those who need” written on the top. Good people are exist. Bratislava also has its unique architecture. Even though it could not be compared to Prague or Budapest, but it does have its own charm by mixing the baroque, art nouveau, and socialist realist, and modern buildings altogether. 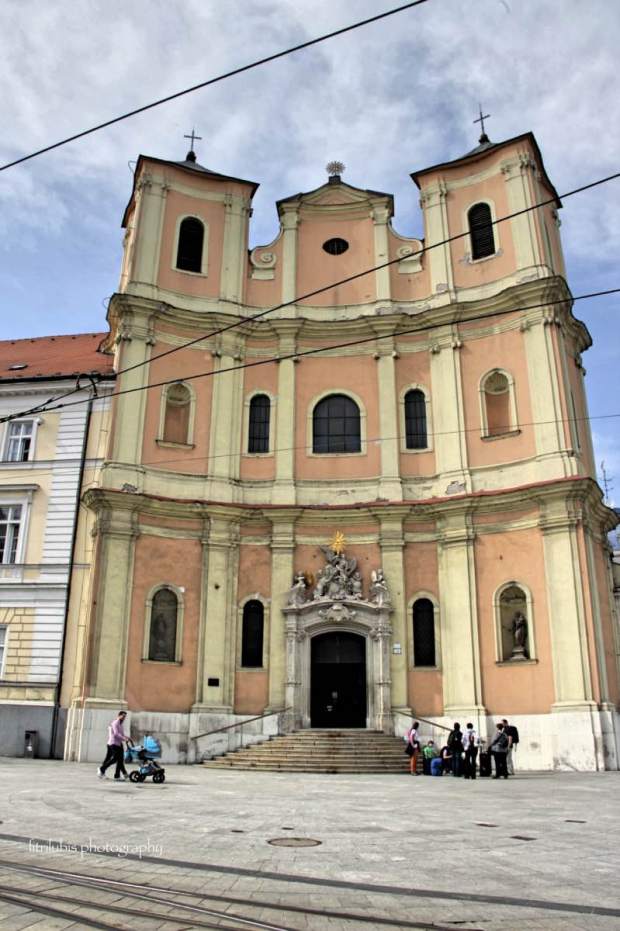 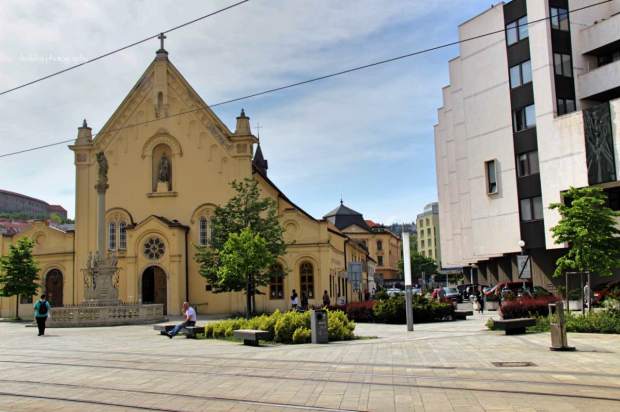 St. Michael gate. The city gate, with the height of 51 meter and applying baroque architecture

St. Martin’s Cathedral in Bratislava. it was used as coronation site of the Kingdom of Hungary. 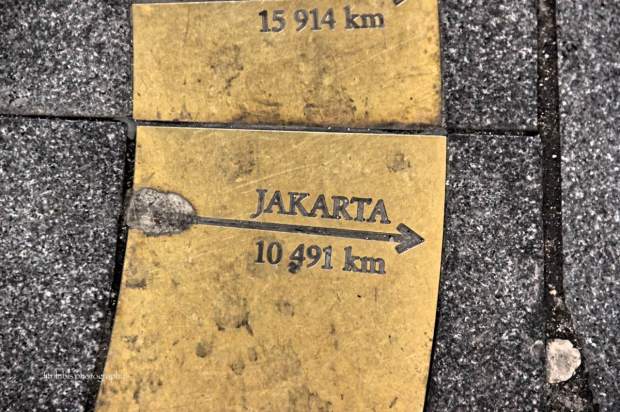 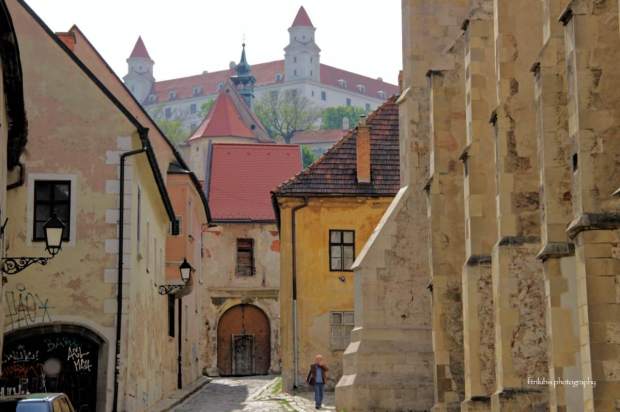 Street at the old town of Bratislava. The Bratislava Castle is on the background. We did not clim up there.

A cute shop at Bratislava, Slovakia.

A cute shop at Bratislava, Slovakia. 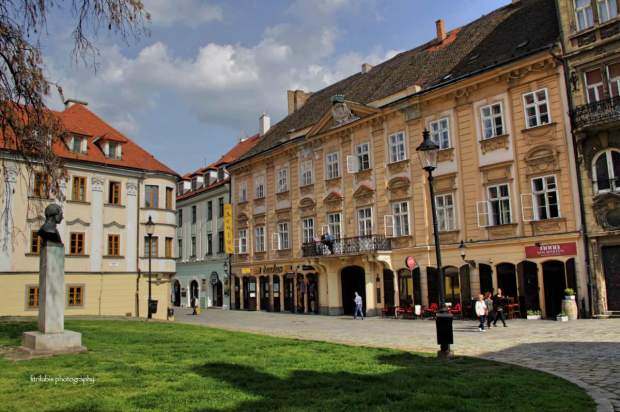 The old town of Bratislava, Slovakia. 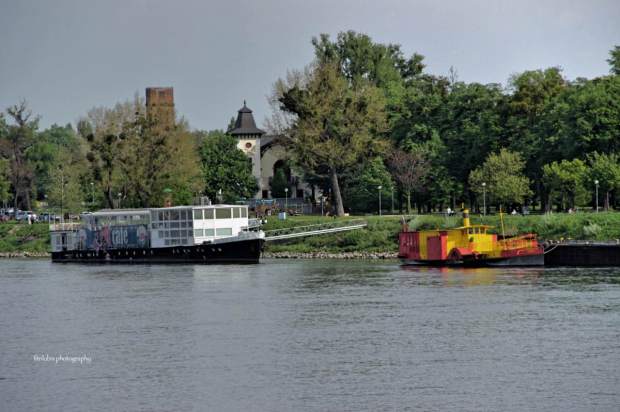 When we walked back to our hotel, many restaurants had opened the tables outside. Customers enjoyed their dinner, entertained by classical musics played by street musicians. The evening at the old town was like the open air opera. Everywhere we went, we were spoiled by the sound of music. T and I realized that Bratislava has a lot to offer. We wish we had more time in Bratislava.

16 thoughts on “We Picked Bratislava”