My sister was obsessed with the movie of Leonardo Di Caprio, “The Beach”. I still had no clear clue whether she was obsessed with that good looking actor who won many hearts while he acted as Jack Dowson in the legendary Titanic movie, or she was simply amazed with the beauty of tropical beach islands in Thailand. So, as a good sister, I think the latest one sounded more make sense, therefore I left everything to her to arrange our trip to Phuket, the place where ‘The Beach’ movie took place.

That was my first visit to Thailand, if transit in Bangkok during my flights to Africa was not counted. Our plan landed in Phuket Town in the late afternoon, and in the same time I found that my sister had not booked the hotel yet. So, we were ended in a lot of confusion and discussion until the taxi driver brought us to one travel agent company which was so kind to book us hotel with a good price too in a neighborhood called Patong.

Phi Phi islands were our first and priority agenda during our trip to Phuket. The tour company also arranged the tour for two of us in the next day, after I convinced my sister so badly that it would be very difficult to arrange to do islands hopping if we decided to go alone instead of together with the group. Finally, she agreed even though she was a bit disappointed, since she was expecting that we would stay in one of the islands, which sounds not so much interesting to me. Well, I love nature, but I prefer city with good lighting and no mosquitoes, apparently.

The next day, the tour company picked up from the hotel at 8 am and took us to Phuket harbor located in Phuket town, where our trips would get started. We were not alone. There are some passengers, oh no, there are a lot of passengers were with us. We were divided to some groups, where each group would have their own speed boat to travel with. Each person got a sticker to be put on our clothes as our group identity. There were about 18 passengers on board on our boat. A Chinese American lady named Christina joined us for the whole day. She spent 6 weeks in Jakarta to do some social works in one of hospitals there, and she kept talking how crowded Jakarta was for the whole trip. 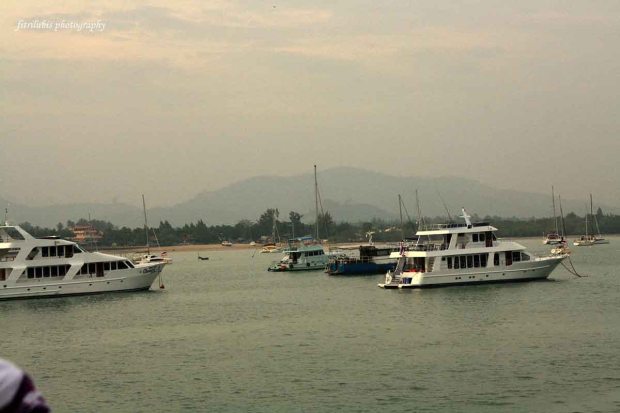 Our first stop was Maya Bay, the most famous one, where the name taken after Maya, one of figures from The Beach movie. The beach, of course, it was really beautiful, despite grey clouds flying above us.  Yet, I need to warn you here. Do not expect to see the beach as you saw on the movie of Leonardo DiCaprio showing solitary in beautiful tropical island. Instead, Maya beach was full of speed boats with hundred people in the same time. It was hardly shooting any photos without people standing or walking in the background. We just stopped for thirty minutes and Christina couldn’t help herself for not jumping into the water. 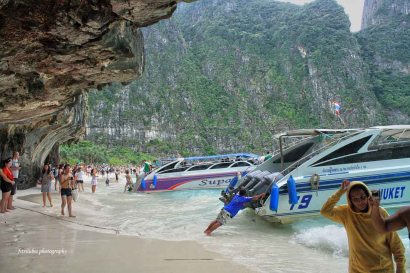 The next stop was Monkey Bay. As its name, this island is habitat for varies of monkeys. Our boat did not lie its anchor here, instead we just stopped for ten minutes to give chances for tourist for taking photos of the monkeys. My sister and I were not so interested to interact with the monkeys. Coming from the country where various types of monkey are found, seeing them seemed not so very special to us.

Sama Bay was our next destination. Unlike Monkey Bay, here our boat stopped longer since this area was purposed for snorkeling. The tour company had prepared snorkeling equipment for every passenger. Some didn’t want to miss the chance to swim in the clear turquoise water, nevertheless half of passengers choose to stay on the boat since rain came in the same time. Christina, of course, she swam and I helped her to get her photos from the boat while she enjoyed the beauty of underwater. 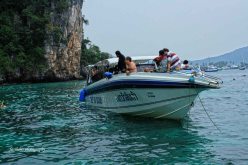 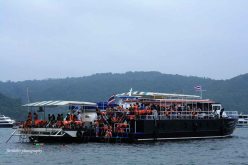 The tour package included the lunch, thus, our group went to an island called Phi Phi Don to enjoy the delicious Thai meals. Unlike other islands which were inhabitant, Phi Phi Don has some people to live in. It also has some restaurants and hotels. So if you want to spend the night in this small island, you get some choices. We stayed a bit longer in this island, gave us chances to explore the neighborhood surrounding. Two Thai girls followed us and asked us to get some photos with them. These two girls were in our group. They came from Phuket town with two men they met somewhere and were abandoned by these two men for the whole trip. They didn’t speak English well, but they tried so hard to get us understand for what they said and were so friendly to my sister and me. 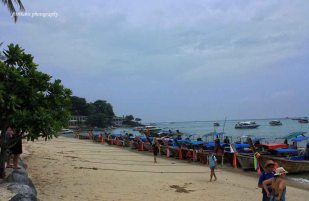 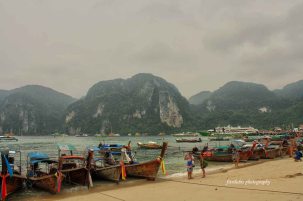 Phi Phi Leh was our last stop. It was also Inhabitant Island. Nonetheless, during the day, some local merchants were there to sell some souvenirs and stuffs to the tourists. Some small restaurants could be found as well  if you want to get something to drink or having some snacks. The beach was not so lovely, where many sharp corals found along the beach. However, if you want to walk a bit further, you still could find some sandy beach to swim or just to lay down while enjoying the breeze and hearing the sound of wave. 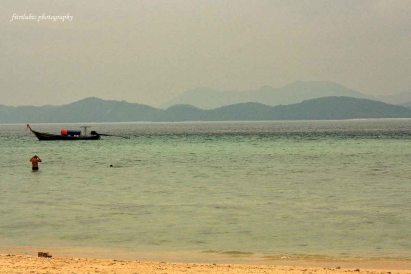 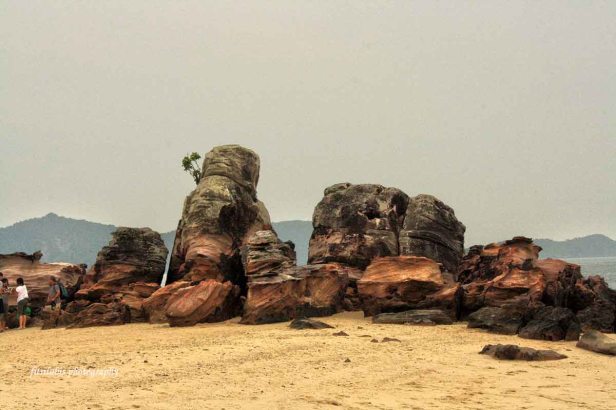 At the end of the trip, I agreed that Phi Phi Islands were beautiful. It was very beautiful, indeed, even though it was cloudy and rainy. But with thousands or million tourists coming in the same time, made that place less interesting. In addition, some tourists couldn’t keep their manners to keep the islands cleaned. It left me a question in mind. When a beautiful place becomes so well known, it will attract so many people to visit that place. It also helps to increase the income of the locals in the same time. But, at the other hand, it also destroyed the place itself even though it was done intentionally. Some careless tourists just stepped on the live coral, for example. They didn’t realize that their actions could kill the corals. Or some tourist just took out the star fish from the sea for only showing them in their selfie photos. So, which one is better? Kept the place unknown or publish it to the public? I still don’t get the answer yet.

11 thoughts on “Phi Phi Islands, They’re Beautiful Without The Crowd”