One Day in Kigali, And I Had My Heart Broken

Finally I had my first inter nation road trip in Africa. Yes, I made it. After almost two years living in Bukavu, where the border of Rwanda is just few kilometers only from my house, in one long weekend I made my first visit to Kigali.

I would not travel alone, my friend, Eno working in Entebbe would joined me to explore city that had banned the using of plastic bag in the last few years and made Kigali as the cleanest city in East Africa. Yet, I would travel alone from Bukavu, since Eno would travel to Kigali from Goma, DRC due to some works that she required to do before facing the long weekend. So, on Friday morning, I was ready to go. From my house to the border just required 20 minutes driving. Manu, my Congolese friend, accompanied me to cross the border. We went with taxi as early as we could since I didn’t want to face the long queue in DRC border. But still, when we arrived at the border, I still had to be in line for almost one hour before I got ‘exit’ stamp on my passport.

There were no vehicles allowed to cross the border, except the ones that belong to the United Nations and other diplomatic corps. So, to reach Rwandan border Manu and I should walk while carrying my backpack, which was a bit heavy. I should thank Manu for carrying that bag for the whole time. The distance between is approximately 500 meter (correct me if I am wrong)

So, I got Rwandan border and had no problem at all with immigration officer. For Indonesian citizen, I could get the online visa HERE and paid it at the border as much as 30 USD for single entry. Manu, as DRC citizen, he didn’t required any visa, even he did not need passport to enter the border. He just needed to show his ID and he could enter and leave Rwanda as like as he wants. From the border, we took taxi to bring me to Kamembe bus station, where Manu left me to return to Bukavu, meanwhile I was heading to Kigali.

It was not a short journey. It took 7 hours driving for the whole journey to reach Kigali. Nonetheless, it was worth it. The scenery along the way was terribly beautiful. It was amazing watching the tea plantations along the road. The most amazing part when we passed one of National Parks which is known as the world’s habitat of chimps and monkeys. The rain forest was amazing. It was the heaviest green forest that I’ve ever seen in my life. The road was really good for African standard especially if I compared it to Bukavu. 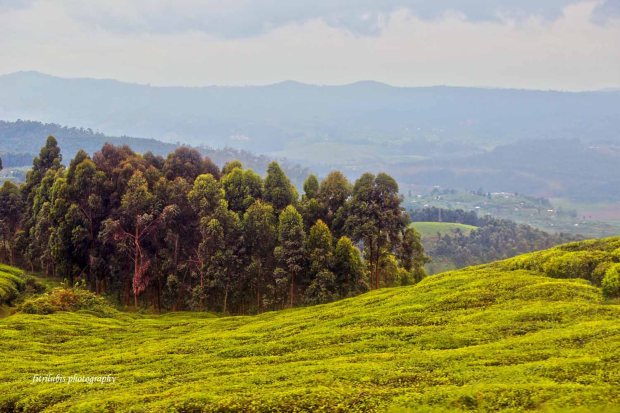 Tea Plantations on my way from Kamembe to Kigali 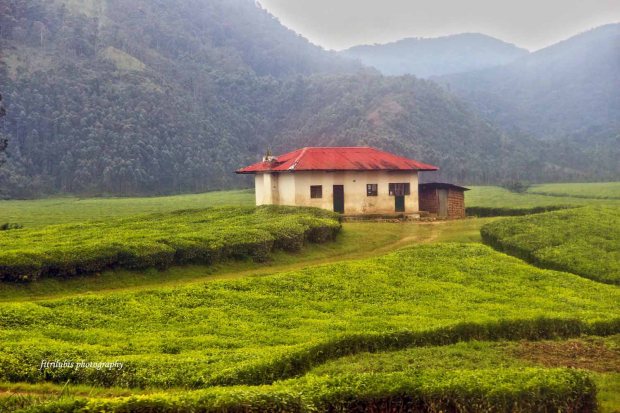 Tea Plantations on my way from Kamembe to Kigali

The Rain Forest of Rwanda

A monkey we found in the forest of Rwanda

Beautiful scenery on my way to Kigali

At 3 pm, I arrived in Kigali. Eno arrived earlier than me and she waited for me at the hotel which is located in city center and only required 5 minutes by using motor taxi from the bus station. I don’t really recommend using this motor taxi since many of drivers drove very fast. But, it could be good solution too if you don’t want to spend so much money to hire taxi driver to take you around. But ensure, that the driver has helmet for his passenger. 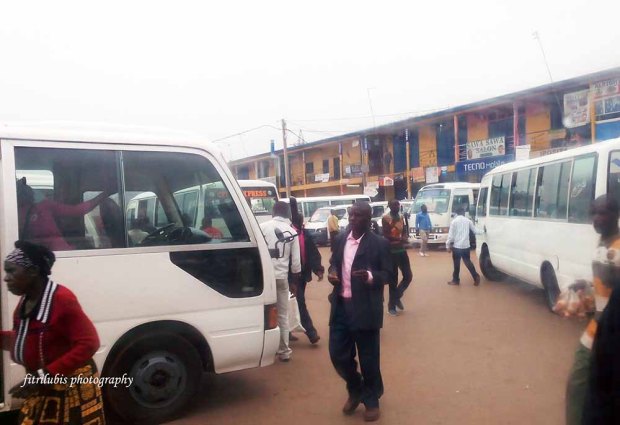 We didn’t do many things at the first day. So far, Eno and I just walked around the city and took some photos here and there. Kigali is not really big city, but it’s clean. We hardly found some trash lying on the road. Trash baskets are everywhere. We found a village crafts selling typical Rwandan hand craft. We even found a mosque where Eno took chance to do pray where we became the center of attention of the locals. 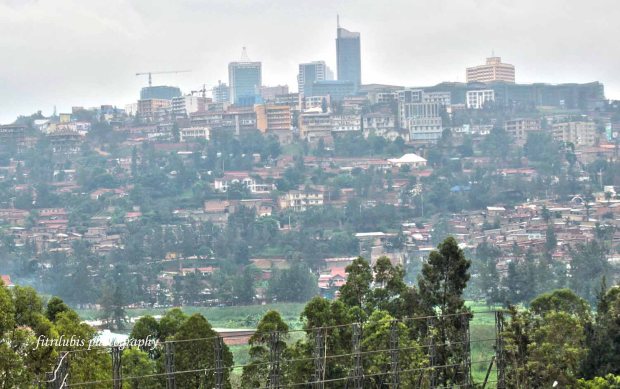 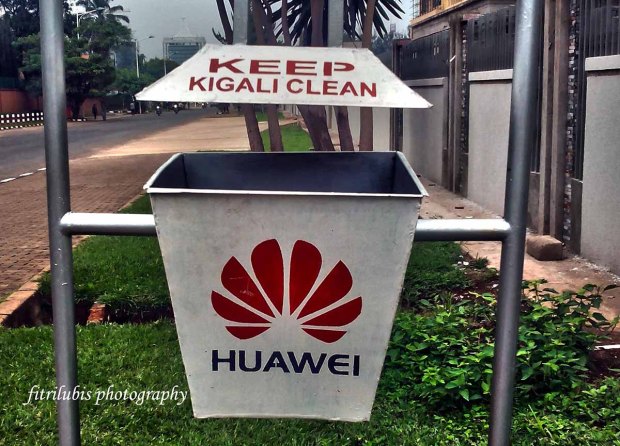 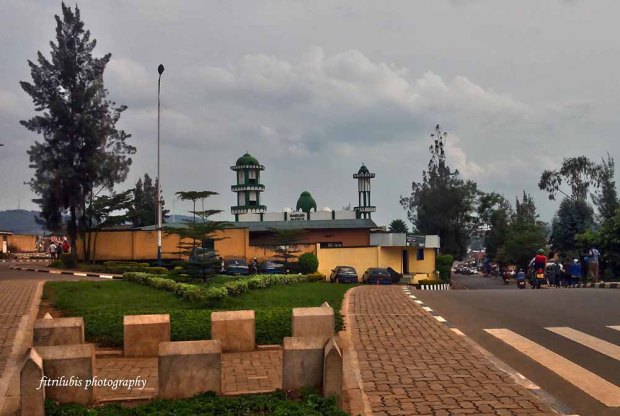 One mosque we found in Kigali

At second day, we planned to visit Kigali Genocide Memorial. But before coming there, we pampered ourselves to have amazing breakfast at Serena Hotel. In our defense, we stayed at the cheap hotel, so we deserved to have breakfast like kings in return.

Me, while having breakfast at Serena

So, here we were, standing in front of museum and would see one of the saddest history in world’s history. There was no entrance fee to enter the museum, but if we wanted to hear the tape recorder, we need to pay another 20 USD. We chose for not paying since everything inside has clear explanation in Rwandan, English and French.   The museum is divided to three main parts.

The first part is showing photos of Genocide in Rwanda happened in 1994. It is also known as genocide against Tutsi, one of tribes in Rwanda who got better facilities during colonization of Germany and Belgium. The ones who could pay 10 cows for their legalization would be considered as Tutsi and the ones who could not were considered as Hutu. Tutsi people got more education facilities, good position at works and had higher social status among the Rwandans. This phenomenon caused the differential and jealousy of Hutu. It was in 1990s when Hutu had dominated the power of country and provoked everybody to hate Tutsi. Radios were used to spread hatred and made 10 Hutu commands that must be obeyed by every Hutu. People started to kill each other. Friends killed friends and neighbors killed neighbors without mercy. 6 UN peacekeepers died in their effort to protect the Prime Minister, the moderate Hutu that against the genocide. Foreign workers were force to leave the country, left their friends behind and couldn’t do anything to save their friends. This civil wars did not only cause harm for the Tutsies, but also the Hutus in the same time.

The second part is showing photos of genocide happened all over the world, such as holocaust in Germany, genocide in Namibia, Cambodia and Sebrenica.

The last one is the hardest and the saddest part where all rooms showing the photos of child victims of genocide in Rwanda. Every photo is filled with information about each child. I couldn’t hold my tears down while seeing those innocent faces that had lost their lives due to cruelty done by human beings. Until I wrote the stories down on my journal, there was one face of children that I couldn’t get out of mind. And these are the information I found below of his photo.

Name    : David. Age: 10 years old. Enjoyed: made people laughing. Wanted to be: a doctor. Favorited: chocolate. The last words: The UN will come for us.

I was broken-hearted. War did not bring anything but damage and death here and there. 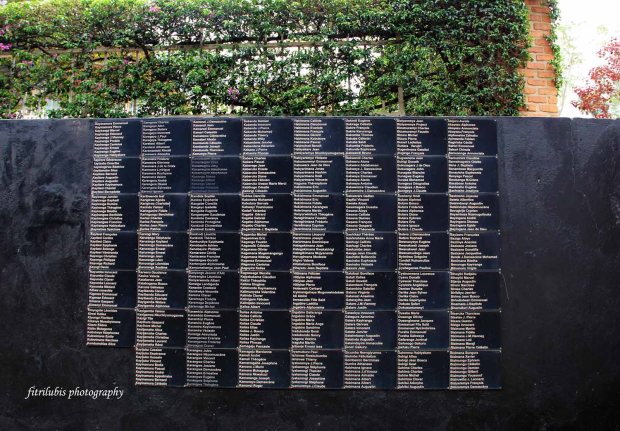 The names of victims of Kigali Genocide

These three siblings started to cry once they entered the museum. They keep holding hands each other during the visit. 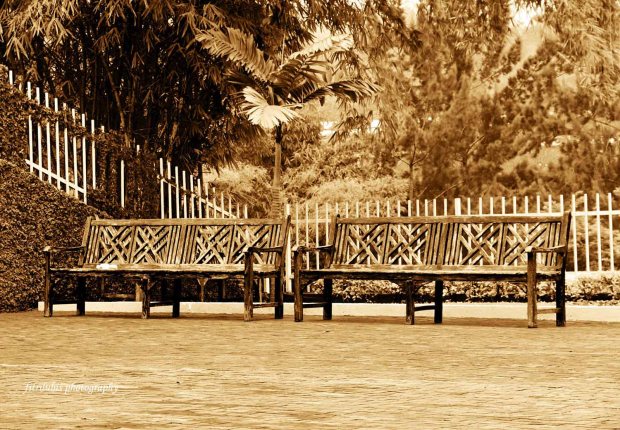 I went out of museum with tears in my eyes. Some people were crying too. There were a lot of people came to visit the cemeteries since the next day was commemoration day to remember the victims of genocide. Our short visit to Kigali started with the bright look and ended with the sad look. For personal reasons that I could not write on this blog, our visit has forced me and Eno to leave one piece of our broken heart in Kigali.

← Landed in The Land of Fairy in Cappadocia
Path →

25 thoughts on “One Day in Kigali, And I Had My Heart Broken”